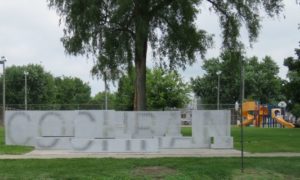 Located in the center of the city, Cochran Park is one of the oldest parks in Council Bluffs. It’s named for Colonel Addison Cochran, a former mayor of Council Bluffs who donated the land.

In its early years, the park was a year-round destination for young people and families using the swimming pool in the summer and an intentionally flooded basketball court as an ice rink in the winter. Today it’s still known as a place to for children and families to gather and relax.

Artist Jeffrey L. Day, AIA, designed with that in mind. The new signage is a series of separate panels that spell out “COCHRAN.” Additionally, the aluminum panels fold out at their bases to become benches for sitting and conversing. 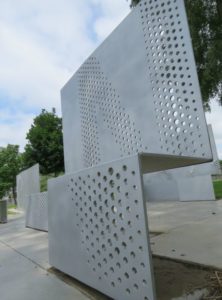 “We were interested in the impact of motion and the position of the viewer as we presume most people will see the sign when driving by,” said Day, a professor in the UNL College of Architecture and Co-Founder of Min | Day Studio who has also designed projects for the Blue Barn Theatre and the Bemis Center for Contemporary Arts. “But we wanted our installation to go beyond simply making a clear identifier to actually creating a place within that park where people can sit and relax.”

Fabricated in Bellevue by Brand Metal Works, the large structure will completely change the space and become a meeting place for the surrounding community.

“We hope it becomes a place where people congregate and spend time,” Day said.