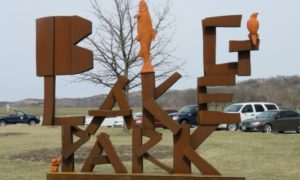 In the early 20th century, this spring-fed lake became a popular tourist attraction due to the belief that the springs contained medicinal qualities. People would travel there on Sundays to bathe in the water. Nowadays, residents are still flocking to Big Lake Park, but because of the quality fishing, serene bird watching and gorgeous lake views.

“I wanted the sign to have a Jellystone Park/Yogi Bear kind of esthetic, like a bunch of kids found these chunks of material and glued them together in an ad-hoc manner,” said Friedman, who fabricated the sculpture with naturally rusting COR-TEN steel and cast aluminum animals.

The neighborhood association agrees it’s a simple, thoughtful nod to what separates Big Lake Park from other city parks in the nation.

“Art and nature are two sides of the same coin,” said Friedman, who is also involved in a project called Typecast Recast organized by the Anti-Defamation League and Bemis Center of Contemporary Arts in Omaha. “Both inspire creativity and imagination. Signage can be droll, but the signs that I’ve seen by the other artists give specificity and individuality to each park.”

One of Council Bluffs’ largest parks, Big Lake Park stretches 200 acres around a bend in the Missouri and rests in the shadows of the Loess Hills. It contains four lakes, one large one to the north and three smaller ones to the south. The south side also includes two playgrounds, a large covered picnic shelter, a fishing dock, a baseball diamond, a soccer field, and jogging/biking trails. The north side of the park has been left an intentionally wild marshland, where park-goers will find waterfowl, beavers, muskrats, and deer enjoying the land. The lakes are stocked with trout, bluegill, bass, and catfish.

With cement trails heavily used by cyclists, walkers, and joggers, the park is the perfect trailhead for a bike path that encircles the entire city of Council Bluffs. Big Lake is not a typical city park, and the new signage reflects that nicely.