A brick factory once stood where Sternhill Park stands today. The Wickham Brick Factory was responsible for the historical architecture of many of the buildings and houses built in Council Bluffs in the mid-19th century. The factory was demolished in the 1930s, but the wooded hills surrounding the park still contain “klinkers” or leftover pieces of brick.

Artist Jason Manley was inspired by the park’s history to use brick as the core material for the new signage for Sternhill Park. Upon first glance, visitors may see a labyrinth of walls displaying the park’s name, but upon further investigation from above, the structure reveals the word “Play” in nearly twenty-foot long cursive letters. 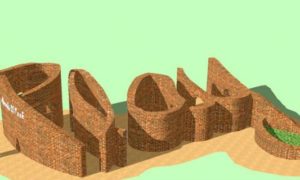 The completely transformative “Play” contains approximately 1,500 square feet of mortared brick walls. The idea behind “Play” is to utilize brick in a way that is counterintuitive to traditional building.

“I hope it inspires and activates the imaginations of those who visit the park, particularly children,” said Manley, who also designed the temporary sign sculpture “Suspending Belief” on the rooftop of the Bemis Center for Contemporary Arts in Omaha. “I’m interested in the potential for public art to heighten one’s experience of a place by creating nuance and opportunity for discovery.  My work repurposes and reinterprets functional forms in the built environment— in this case signage — for poetic purposes.”

Sternhill Park is named after Dr. Isaac Sternhill, a prominent physician who provided his services free of charge to families with little income. He gifted the land located on North 8th Street that is surrounded on three sides by the Loess Hills.

Known as a popular site for kite flying, Sternhill Park features numerous hiking trails, a mid-size modern playground, a soccer/football field and a gazebo often used for family picnics, birthday celebrations and school activities. It’s a frequent destination for children, and a park that the local neighborhood hopes will be utilized even more following the installation of new signage.