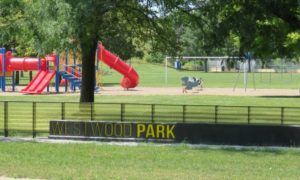 After changing locations from a secluded space on the banks of the Missouri River to its current location on 35th Street, Westwood Park has become a place to picnic in the summer. The new, eye-catching signage calls attention to all that Westwood Park has to offer.

Utilized year-round, Westwood Park features late-night baseball games on the lit diamond, and both pickup and organized games on the soccer field. It’s known as a place to bring children for an afternoon of play and residents come from all over Council Bluffs to gather there. 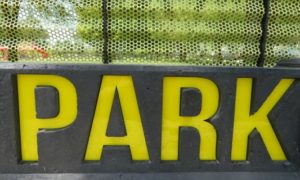 “By abstracting these three elements – dark base material, recessed font and yellow paint – we have attempted to create an abstract summary of the humble qualities of park signage,” Conzett said. “We hope the Westwood Park sign serves as a distinct, functional and long-lasting icon for park visitors and passersby for years to come.”

As architects-in-training, Conzett and Fisher are involved in design and construction projects of varying scales in Omaha and Council Bluffs. The architectural designers also have participated in projects including Elevate with Emerging Terrain and Typecast|Recast with the Anti-Defamation League.

Their Westwood Park sign consists of 100 cubic feet of cast-in-place concrete, 100 linear feet of steel framing and 40 square feet of perforated metal panels. Its long, low presence across the park calls for passers-by to take notice and it serves as a slight fence for children playing nearby. The piece received overwhelming support from the local neighborhood association.