Home Blog Why the Riverfront? 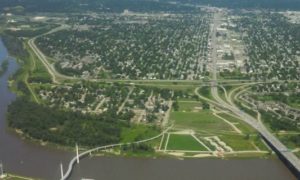 Before the Bob Kerrey pedestrian bridge was even built, it was referred to as “the bridge to nowhere.” Harsh, but somewhat true as the Iowa side of the Missouri River lacked development, usable space and any sort of draw for people to go there.

Simply put, the same can no longer be said. Council Bluffs’ award-winning Tom Hanafan River’s Edge Park is home to events like Loessfest and Country on the River as well as the large-scale public art works of “Rays” and “Big Mo.” It’s a place where families can gather for picnic sand bicyclists can ride the trails. And now, the Council Bluffs City Council recently approved the next phase of the development for the Riverfront. Soon, there will be so much more.

The Iowa West Foundation has been a catalyst in this development from the beginning and with good reason. Our Board sees vast potential for economic development in this area that will benefit Council Bluffs’ and the greater southwest Iowa region. If we want others to get on board with our vision, we need to be aboard the boat. That’s the chief reason we will relocate our headquarters to the Riverfront next year. We want to help drive this opportunity.

Throughout the process, we’ve received questions about what will happen to downtown Council Bluffs. Honestly, it will be a hard place for us to leave. We’ve been located in the Omni Centre, which holds so much history, since 2003, and in downtown Council Bluffs since the mid-90s. Being in the center of the city certainly has its perks. However, just because we’re leaving the building doesn’t mean we’re abandoning the area. Our commitment to the South Main District, the 100 Block, W. Broadway and surrounding streets and corridors remains strong. We recently funded a community Wifi initiative that will bring free internet access to these areas in particular. We’ve been a major source for revitalizing these areas and we are committed to their continued growth.

My response to the inquiry of what will happen to downtown in response to the Riverfront development is to answer a question with a question. Why not both? Truly, it doesn’t have to be one or the other. There can be transformational Riverfront development with office buildings and residential housing AND a lively, bustling downtown with retail shops and restaurants. We are even committed to partnering to make a connection between the two with a revitalized West Broadway and trails that connect the Riverfront to downtown.

Based on the feedback we’ve received from the community, the Iowa West Foundation is taking a more proactive approach through initiatives that impact Council Bluffs and surrounding areas. The Riverfront is just one example and we’re confident it will be the landing spot that is the opposite of “nowhere.”