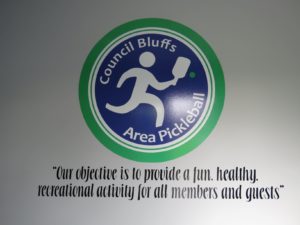 (Council Bluffs, IA) – Construction is officially underway on six new pickleball courts inside the Iowa West Field House. Described as a cross between tennis, table tennis and badminton, pickleball is a paddle sport where two or four players hit a wiffle-like ball over a net. Designed specifically with America’s fastest growing sport in mind, the 16,000 square feet in courts at the field house will be accessed from the southwest side of the building. The facility is set to open in September of 2019.

“This will fill a vacant space to become yet another draw to the Mid-America Center area Entertainment District, a location and corridor that the Iowa West Foundation has heavily invested in strengthening over the past decade,” said Pete Tulipana, President and CEO of the Iowa West Foundation. “In addition, it allows pickleball players throughout southwest Iowa to have much needed access to indoor courts year-round.”

The Council Bluffs Area Pickleball Club will operate the space within the Field House, which is estimated to cost approximately $600,000 to outfit for pickleball – all funded by Iowa West Foundation. The Foundation will lease the space to the club for $1 per year.

“We are appreciative of their support as this will be the only multi-court indoor pickleball facility in the metro area that is designed specifically for the sport,” said Council Bluffs Area Pickleball Club President, Melanie Shellberg. “It’s a real opportunity as the number of players of all ages continues to grow. We are very excited about it.”

Shellberg said fees and programming are still being finalized, but will include open recreational play sessions throughout the day, opportunities to reserve court time, and lessons for beginners.