(Council Bluffs, IA) The leader of one of the Midwest’s largest private foundations has announced his decision to retire. Pete Tulipana, President and CEO of the Iowa West Foundation, who also serves as the Executive Director of the Iowa West Racing Association, has led the organization for more than eight years. He will continue to serve in the role until a replacement is hired in 2020.

“It is with a deep sense of gratitude for the opportunity I have enjoyed to lead Iowa West that I plan my retirement from the position of CEO,” Tulipana said. “Iowa West is a tremendous asset to Council Bluffs and southwest Iowa and it has been my pleasure to have had the opportunity to partner with the Board and the community to steward the resources of the foundation.

“I am proud of the accomplishments we have achieved together.” 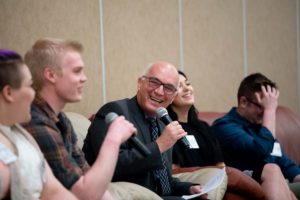 “Pete has been a force for positive change in our community and our Foundation, said Rick Crowl, Iowa West Foundation Board Chair. “He led us from being a grant-based organization to being initiative driven, resulting in The 712 initiative, the Pottawattamie Promise scholarship program, and Kitchen Council. His vision, his passion, his leadership, and his humility made this possible and we are grateful.”

“Pete has provided tremendous leadership and his guidance will be greatly missed,” Killion said. “He was instrumental in implementing a proactive focus to the philanthropic needs of our community and utilized his relationships with Omaha foundations to leverage our investments. His visioning has been transformational and his fingerprints will remain for a very long time.” 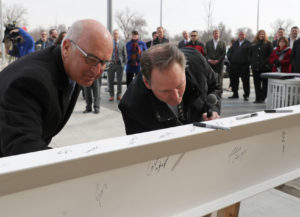 Tulipana joined Iowa West in March of 2012. Prior to that, he had served as the Chief Operating Officer for the Columban Fathers, a nonprofit internationally headquartered in Hong Kong and as the President and CEO of Heartland Family Service in Omaha, He utilized his 30 years+ of nonprofit administration experience to strengthen Council Bluffs’ area nonprofits while at Iowa West, implementing multi-year funding and capacity building programs during his tenure.

Other equally important accomplishments include:
-transforming the strategic planning process to better engage the community through a series of listening sessions;

-increasing the emphasis on openness and transparency, as measured in an outside grantee perception report that showed significant improvement;
-and shifting to a more collaborative, proactive initiative process for transformational impact

“Our transition to focus our work to have a greater impact through our initiatives is something that I am very proud of, and I believe is making a significant difference in the community,” Tulipana said. 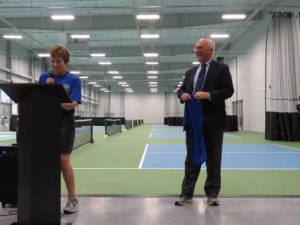 A certified fundraising executive and skilled facilitator, Tulipana received his bachelor of arts degree in political science from Benedictine College, a master’s in social work from the University of Kansas and a master’s in public administration from the University of Missouri – Kansas City. He and his wife Mary Anne have been married for more than 40 years and have three grown children, and two grandsons, Finn and Ollie Pete.

What Others are Saying

“Pete Tulipana, through his work on behalf of the Iowa West Foundation, has been a dynamic force behind a multitude of community improvements that have taken place throughout southwest Iowa. Thanks to Pete’s leadership and commitment to public-private partnerships, the City of Council Bluffs has received financial support for a multitude of amenities that have enhanced the quality of life for all our local residents. We are grateful to Pete for his vision and his dedication to improving our community.”
Mayor Matt Walsh

“Under Mr. Tulipana’s leadership, the Iowa West Foundation has invested significant grant funding to enhance educational experiences for all students. The grants have made a positive and long-term impact on individuals through scholarships, summer learning, preschool, the International Baccalaureate Program, and so much more. In addition, we are grateful that Iowa West Foundation’s financial support has made it possible to transform the district’s athletic complex and our TradeWorks Academy into sources of tremendous pride. We are grateful for Mr. Tulipana’s vision and willingness to create connections and build tremendous capacity throughout the community.”
Dr. Vickie Murillo, Superintendent, Council Bluffs Community School District

“Pete is a tremendous asset to the community of Council Bluffs. He understands the needs of nonprofits and nonprofit executives and has consistently gone out of his way to make sure they have the resources they need, including capacity and leadership development. Pete’s leadership will be seen in the community for years to come.
Jaymes Sime, Executive Director of the Micah House

The Iowa West Foundation has awarded more than $500 million to nonprofits and governmental agencies through southwest Iowa and eastern Nebraska since the inception of its grant program. Funding for the grants comes from investment earnings and the Iowa West Racing Association, which receives contractual fees from casino operators, Ameristar and Harrah’s. IWRA is the license sponsor for Ameristar and Harrah’s and the license holder for Horseshoe-Bluffs Run. The Foundation targets resources into programs and projects that focus on economic development, education, placemaking and healthy families.