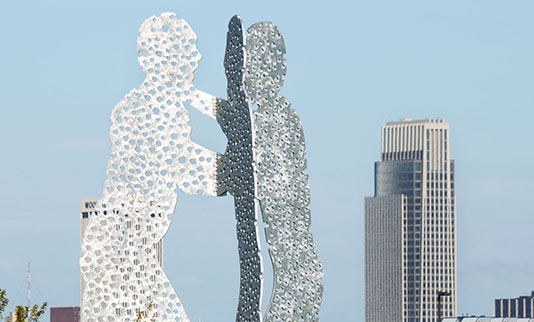 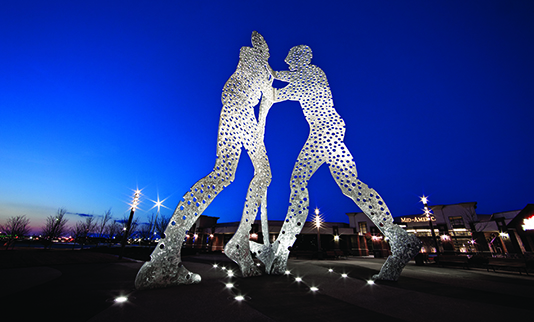 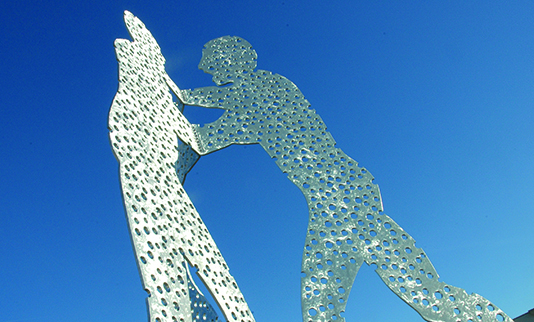 Artist Jonathan Borofsky is driven to show the connectedness of humanity. His sculpture Molecule Man is located at the confluence of Interstate 29/Interstate 80 joining Council Bluffs, Iowa to Omaha, Nebraska and shows three interconnected human figures. Review the links below to learn more.

The confluence of Interstate 29/Interstate 80 joining Council Bluffs, Iowa to Omaha, Nebraska might be the last place you would expect to find a 50-foot aluminum sculpture created by an internationally known artist. The $1.8 million sculpture, instantly recognizable as three giant, interconnected human figures, was created by Jonathan Borofsky, one of the most important American sculptors working today. Not only is Molecule Man clearly visible from I-29 and I-80, it stands near the entrance of the Mid-America Center Arena and Convention Center in Council Bluffs, a community on Iowa’s western edge. The Mid-America Center district is an emerging civic center and regional entertainment destination which draws upwards of 13 million visitors every year.

That’s the appeal for Borofsky, who has placed many large sculptures in urban centers around the world. Borofsky explained, “Whether the city is large or small, the pleasure for me is the same. I enjoy creating symbols about our shared humanity, and then placing them in public settings where they become part of people’s everyday life.”

There are only two other large-scale Borofsky-created Molecule Men in the world—one in Berlin, Germany and the other in Los Angeles, California. So, why Council Bluffs, Iowa? The installation of Molecule Man is part of a vigorous plan to use public art as a key ingredient in transforming this Iowa community with a population of 60,000 into a regional destination. The effort is guided and privately funded by one of the largest foundations in the Midwest, the Iowa West Foundation. President and CEO, Pete Tulipana, believes public art supports the foundation’s big picture focus on education, community betterment and economic development.

The sheer size of the installation required a specially-trained installation team and sophisticated engineering. The base of the sculpture is 44 feet in diameter. Together, the three figures weigh approximately 33,000 pounds. The gleaming metal sculpture stands 50 feet from ground level. From idea to completion, Borofsky estimates approximately 12,000 man-hours to create Molecule Man.

The large-scale sculpture has been customized to withstand Midwestern weather conditions. The artist specifically chose a metal known for its strength — a 2 1/2-inch thick aluminum plate, an alloy known as aircraft aluminum, which is used to build airplanes. Once assembled, Molecule Man has been designed to withstand 100 mile-per-hour straight-line winds.

Jonathan Borofsky was born in 1942 in Boston, Massachusetts. He says every artist’s work is their own self-portrait. The work of Jonathan Borofsky exposes a great deal of his character and psyche, at times intensely personal with dream representations and at other times more idiosyncratic by numbering his works (based upon his commitment to counting) rather than signing them.

Difficult to categorize, Borofsky’s art has been described as Pop, Minimal, Conceptual and Neo-Expressionist. Though aspects of his work fit such descriptors, fitting into a definition has never been a goal. Borofsky states his aim in visual art, and even music, is searching for a feeling of oneness and of just being happy to be alive.

In the early 1990s, his focus shifted from gallery and museum-based installations to large-scale outdoor public commissions. Borofsky enjoys seeing how the public interacts with a sculpture and perhaps even taking personal ownership of it.

The influence of counting and dreams has not left, but the scale has changed. Visions such as a red ruby heart, the worker in all of us, and defying laws of physics exist with a universal appeal for audiences throughout the globe. In Frankfurt, Germany, Hammering Man stands as a symbol of identity. Once on display in Rockefeller Center, Walking to the Sky now inspires students at his alma mater, Carnegie Mellon University.

His art, his self-portrait, shows the connectedness of humanity.

Why is the Mid-America Center such an ideal location for Molecule Man? Watch the sculpture come together as artist Jonathan Borofsky shares the common bonds that link his work from Council Bluffs, Iowa to Beijing, China.

Jonathan Borofsky is known world-wide for his massive contemporary sculptures. Listen to the artist as he shares the inspiration for Molecule Man and explains why Council Bluffs is an ideal home for his towering giant.