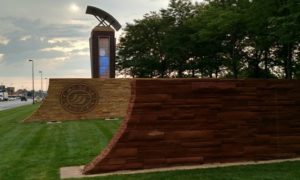 The following letter was sent to the Council Bluffs City Council on March 22, 2017.

On November 15, 2016, the Iowa West Foundation approved a $9 million grant initiative for streetscape improvements as part of the redesign and reconstruction of West Broadway. The City of Council Bluffs Planning Department had engaged professional architects and landscape experts to draft a Master Plan for this project. This planning process took almost a year to complete. It involved an extensive study and engaged city leaders, members of the community and business representatives in public discussions throughout the process. Initial drafts of the Master Plan included a significant number of medians. Those medians were scaled back after professional engineers and architects received feedback and had an opportunity to analyze the impact these medians would have on safety aspects, traffic flow, and adjacent businesses.

The landscape architects and engineers who drafted the Master Plan are experts who have the education, training, and experience in designing for traffic flow, safety, beautification, and aesthetics. They also have the expertise in understanding how traffic flow will affect adjacent businesses. It is everyone’s goal to make certain that none of the adjacent businesses are adversely impacted.

After this year-long, careful study and opportunity for public input and examination, the Master Plan was presented to the City of Council Bluffs. The City Council approved that Master Plan on October 10, 2016. The Iowa West Foundation was integrally involved in the entire process as well, to determine that this Master Plan met our goals and objectives in funding this grant initiative. Our objectives and goals regarding this project are two-fold: (1) to beautify the City of Council Bluffs and; (2) drive additional investment in our community. The Iowa West Foundation approved the Master Plan and based upon that approval, agreed to fund the project for $9 million and to partner with the City on this project.

This is not the first time we have partnered with the City of Council Bluffs on a major project. This West Broadway Improvement Project is, however, one of the largest single projects that the Foundation has ever funded.

On the West Broadway project, we are facing a new dilemma. This is the first time that the City of Council Bluffs has made a unilateral and material change to the scope of the project after the project was approved and commenced. We believed we had an agreement between partners on the scope of this project.

On previous projects, if there was a material change to the scope of the project, both parties followed a process and both partners had to agree to any change. Otherwise, the project continued as agreed. If for example, the Iowa West Foundation wanted to make a material change to the West Broadway project, it would need to be done by agreement with the City of Council Bluffs. That has always been our relationship as partners. We understand that changes may be necessary and we are willing to work with the City on those changes, but they cannot be done unilaterally and without a well-thought out process.

We would like to discuss the process going forward. The normal route used for material changes would be to consult with the experts that were hired, including the architects, engineers and landscape experts; receive their input and recommendations and then based upon a fully informed and thoroughly vetted process, reach an agreement on the change.

If the City is allowed to make material and substantial changes to the West Broadway beautification project unilaterally and mid-way through the project, that creates a situation where the Foundation has funded the project without knowing the ultimate outcome of the project. You would never allow us to do that and you can certainly understand that we can’t go forward on that basis.

The bids have been let and construction had already begun on Phase I. The Iowa West Foundation is now faced with looking at whether or not to fund the full $9 million not knowing what the ultimate design or plan will be. If the City Council can make this change, what will keep them from making other material changes unilaterally throughout the next five phases? It is this uncertainty that makes us unwilling to go forward investing $9 million in a project where we don’t know what the ultimate outcome will be and where we have no apparent opportunity to be heard or agree with any material changes. It is difficult for the Iowa West Foundation to partner with the City of Council Bluffs unless we have an understanding that if there are major changes to be made on an agreed upon project mid-stream, those changes have to be made by agreement of both partners.

The Foundation Board met on Tuesday, March 21 to discuss and vote on how to proceed on this project. The Board unanimously voted to fund Phase I of the project as planned. Phase I was not materially changed by the City Council’s amendment. The Board also unanimously agreed that the beautification of West Broadway is vital to the future of the City of Council Bluffs. We are committed to the $9 million grant based on the original design. We will continue to honor that commitment.

As you are aware, the current grant specifically states that funding is conditioned upon the following:
“That the Master Plan for West Broadway approved by the City Council on October 10, 2016, with all of its proposed elements, is included in the final approval for each phase.”

As such, the funding for Phases II through V do not meet that condition. The Foundation is unable at the present time to reach a decision on whether or not it can make a funding commitment beyond Phase I.

The Iowa West Foundation wants to make it abundantly clear to the City of Council Bluffs that we stand ready, willing and able to fund the streetscape beautification for West Broadway. Based upon this letter, we would like the City Council to respond to Iowa West Foundation President and CEO Pete Tulipana on how you wish to proceed.

Sincerely,
The Iowa West Board of Directors