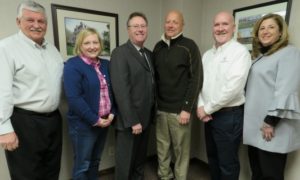 “Our Board members have the significant responsibility of being good stewards of the Foundation’s assets and ensuring that our investments have a lasting impact, said Pete Tulipana, President and CEO of the Iowa West Foundation. “We are confident all of our board members will serve as great contributors to achieving the vision of the Iowa West Foundation: a community where families choose to live and businesses choose to locate because of the quality of life and standard of living.”

Board officers for 2018 include:

The Iowa West Foundation is one of the largest private foundations in the Midwest. It has distributed more than $420 million in grants to non-profits and governmental agencies through southwest Iowa and eastern Nebraska since the inception of its grant program in 1996. Funding for the grants comes from investment earnings and the Iowa West Racing Association, which receives contractual fees from casino operators, Ameristar and Harrah’s. IWRA is the license sponsor for Ameristar and Harrah’s and the license holder for Horseshoe-Bluffs Run.