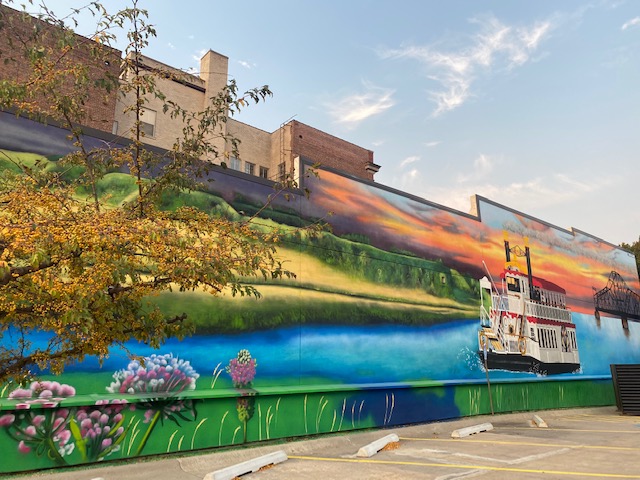 (Council Bluffs, IA) A mural titled “Riverboat on the Missouri” is coming to life by the day in Council Bluffs, thanks to an Iowa West Foundation initiative designed to create a cultural trail throughout the downtown. By partnering with local businesses Availa Bank and Western Iowa Mutual Insurance to fund the mural, Iowa West Foundation’s initiative will bring art to a blank passageway between Bayliss Park and the Council Bluffs Public Library along Pearl St.

“This mural will be a cultural destination in our community that is part of a larger ongoing initiative seeking to take the amenities present in downtown Council Bluffs and unify them into a formal trail,” said Matthew Henkes, Vice President of Grants and Initiatives for the Iowa West Foundation. “The added vibrancy to the downtown district becomes an opportunity for discovery for tourists and increased sense of place for residents.”

Other points along the cultural trail included the temporary crosswalk murals that coincided with the 150th anniversary of the transcontinental railroad in 2019 and the current “Telepoem Booth” exhibit at Pottawattamie Arts, Culture & Entertainment’s Hoff Center.

About Luis Valle
Luis Valle aka El Chan Guri, is a Nicaraguan artist born April 16, 1977 in Managua, Nicaragua.  At an early age his family exiled to the United States due to war and political instability in his homeland.  Valle’s family re-located to Miami, Florida where he was raised and gained his primary education.   Growing up in Miami Luis excelled in the arts from an early age. Valle received his formal training from Florida State University in Tallahassee, Florida where he graduated with a BFA in Visual Arts. He later went on to receive a Masters in Arts Degree from New York University, where he developed an interest in video and video art while continuing his progression as a painter.

Living in New York was a big influence on Valle’s work.  Being in one of the world’s epicenters of art helped enrich his knowledge and skill as an artist.  Visiting the city’s museums and local galleries helped give Valle invaluable lessons as he continued on his studies and research for his own work.  Luis grew an affinity for New York, especially Brooklyn and its diverse art scene but Art Basel and the ever-growing Miami art scene brought Luis back to where he grew up.

Valle has immersed himself in the local scene working closely with the community and local organizations such as Arts For Learning Miami, the Miami children’s Museum, The Miami Dade Library Systems, Boys and Girls Club of Miami, The Overtown Youth Center, Dade County Public Schools, The Art Experience, Giants in the City and Irreversible Projects to name a few. He also worked closely with several of the city’s art galleries and art studios formulating art exhibits and events.  Luis was the co-founder of Brisky Gallery Miami where he served as the gallery director, curator and was also one of the artist.

Currently Luis is very active creating commissioned murals as well as paintings for public art projects, corporate clients, yachts, hotels, cruise ships, malls, businesses, private homes and neighborhoods.  His work can be seen throughout South Florida.  He is an internationally recognized artist with murals in China, India. Nicaragua, Costa Rica, Mexico, Haiti, Dominican Republic, Cuba and throughout the US.    His style can be easily recognized, as it is a blend of influences from indigenous cultures, psychology, shamanism, religion, spirituality, frequency, vibration and energy.  Luis is considered a staple in the Miami art scene and art community.

Luis believes that spirituality has been lost in the mix of commercialism and fashion in art. He strives to bring the essence of the soul to his artwork. He believes that humans are inherently spiritual beings who are here to realize the same goal. Which is the self-realization of thy self and destiny.

About the Iowa West Foundation
The Iowa West Foundation is one of the largest private foundations in the Midwest. It has distributed more than $500 million to nonprofits and governmental agencies through southwest Iowa and eastern Nebraska since the inception of its grant program. Funding for the grants comes from investment earnings and the Iowa West Racing Association, which receives contractual fees from casino operators, Ameristar and Harrah’s. IWRA is the license sponsor for Ameristar and Harrah’s and the license holder for Horseshoe-Bluffs Run. The Foundation targets resources into programs and projects that focus on economic development, education, placemaking and healthy families.