When talking to Jennie Scivally about the trials of raising her middle son, the first thing you notice is her steady demeanor. For a mother who has had a front row seat to mental health issues in children for the past five years, it’s difficult to imagine what she’s been through.

It began in earnest when Aiden turned three. Told he couldn’t go outside or take his drink in the car, he would throw a fit. Fits that normally last a few minutes for other toddlers would last several hours with Aiden.

“People would say, ‘He’s three. How bad can it be?’” Scivally recalled. But it only went from bad to worse.

The older he got, the more destructive he became during outbursts, throwing anything he could get his hands on. His mom videotaped the episodes, but no one could tell her how to stop them. The frequency of the fits only picked up steam when he started school at Lewis Central’s Kreft Elementary in late 2014.

Once he got to first grade, his mom was receiving daily phone calls to come pick him up. He’d overturned a table is his class. Thrown his shoes at a pregnant teacher. Destroyed classroom property. Climbed on furniture. Ran from administrators. Screamed at classmates. The school phone number flashing on her cell phone no longer phased Scivally, who was studying to be a dental assistant.

“I wondered, ‘Is it going to be like this forever? How am I going to hold down a job?’”

It all came to a head later that year. One of Aiden’s fits went on for so long that his mom took him the hospital. After several tense hours in the waiting room, she was told doctors there wouldn’t be able to help her son so they called an ambulance to take him to a Lincoln hospital that might. By the time they arrived it was nearly 2 a.m. and Aiden had fallen asleep. Because he wasn’t in the midst of a tantrum, doctors there couldn’t help him either. But Scivally didn’t give up. She took Aiden back the next day and refused to leave until he was admitted for treatment after threatening to hurt his 2-year-old brother with a knife. For two months he was in and out of the psychiatric hospital, missing school the entire month of November.

By early 2015, Aiden was participating in some form of therapy on a daily basis. There was behavioral therapy, parent-child interaction therapy, sleep therapy, in-home therapy and more.

“It wasn’t helping,” Scivally noted, and it became too much on top of caring for her other two boys, now 13 and 4-years-old.

The administration at Lewis Central strongly suggested Aiden enroll in a new comprehensive children’s behavioral and mental health program through the school. Funded by the Iowa West Foundation, the initiative, in partnership with Lewis Central School District and Heartland Family Service, offers therapeutic services for K-12 students; teacher training to help identify mental and behavioral health issues; a case worker to work with families to remove barriers for children and families; and universal assessment of middle school students to identify issues more quickly.

Because Aiden isn’t the only child who struggles with these issues. In fact, in listening sessions of southwest Iowa superintendents, all quickly identified mental health as the number one concern facing their school systems. 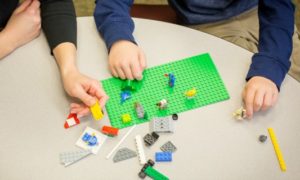 “Mental health is the basis of who are, so it’s equally, if not more, important than academic achievement in schools,” said Alicia Kurzenberger, a school-based therapist with Heartland Family Service who has worked directly with Aiden and others. “If you’re distracted by anxiety, depressed, or have no energy, all of that affects your academic ability. And we have to address it where kids spend the majority of their day.”

The goal of the screening assessment administered to 5-8th graders at school is to early identify issues that might not be caught by educators, though the teacher training to spot red flags for depression and anxiety among other mental health issues has been shown to stop children from slipping through the cracks.

“Typically, no one asks the questions until the problem comes out,” Kurzenberger noted, hence the importance of the screening.

If students have an elevated score on the assessment in one of the five categories: anger, anxiety, self-concept, depression or disruptive behavior, their parents are contacted and provided with information about mental health services through Heartland Family Service that are provided at the school. The hope is that the optional questionnaire, along with teacher training, will allow for earlier identification and thereby lead to improved outcomes.

So far it has. The initial findings show that those who elected to receive treatment showed a 20 percent increase in attendance and a 42 percent drop in problem behaviors.

“We’re encouraged by the early results of the pilot program and are excited to understand more about how these services can help kids lead healthy and productive lives in and out of school,” said Kathleen Rapp, Vice President of Grants and Initiatives for the Iowa West Foundation.

Aiden is a walking example of school-based mental health at work. He and Kurzenberger have practiced emotion regulation, recognizing and verbalizing his feelings, and utilizing coping skills throughout their time together. Because therapy takes place in his school, Kurzenberger has been able to work with Aiden’s teachers and see issues that arise in the classroom first-hand. She also offers suggestions to his team of educators, including relaxation and imagery techniques, for him to use when she isn’t there.

“It’s provided the extra opportunity to view him in a normal day-to-day setting,” she said. “And there was no missing school for an appointment either.”

Now 8, Aiden is a model student despite his diagnosis of Disruptive Mood Dysregulation Disorder, along with Attention Deficit Hyperactivity Disorder. He repeated first grade after missing so much school the first time around, but he no longer needs a paraprofessional, or an Individualized Education Plan. And his mom hasn’t received one call to come pick him up from school.

“I never thought he’d do well in school,” she said. “I didn’t think he’d ever graduate; there was no way we would have made it if we had to keep dragging him to school every day.

“Now, I don’t think school will be a fight. He’s still going to have a bad day now and again, but he won’t stay there anymore. He had to learn how to cope with it, and now he knows how.”

Treatment has allowed Aiden’s likable, charming personality to shine through and showcase his love of sports and the outdoors. These days, he’s generally happy and upbeat, said Kurzenberger.

“He’s more confident at school, and enjoys going because he believes in himself and is willing to try,” she said. “He’s really a pleasure to be around.”

And at that remark, Jennie Scivally breaks into a smile.