The grant application started with this simple sentence: The City of Council Bluffs has a historical treasure stored in a warehouse, out of public view.

The Council Bluffs Fire Department was referring to the 140-year-old centennial fire bell, which was collecting dust after being on display for nearly a century prior to the early 2000s.

“Returning the fire bell to Central Fire Station will help tell the history of the city through the fire department’s eyes,” said Fire Chief Justin James.

But the department needed the Foundation’s help to do so. A simple bell tower could have been built with the funds on hand, but the CBFD wanted a pictorial history on the walls of a surrounding plaza. These additional elements would allow the approximately 2,000 children who visit the fire station each year by the busload to learn more about the department’s storied past.

The Foundation awarded a substantial $85,000 toward the project and encouraged the applicants to invite the community to support the effort as well.

Did they ever. While CBFD initially budgeted just under $50,000 from the community, they ultimately exceeded their goal, raising $84,256 to be exact. At the dedication on May 19th, Chief James announced $331,000 had been raised through 180 donors, including local businesses, residents, firefighters and their families in addition to the Foundation.

“This is not just a fire department project, but a community project we all are proud of,” he said.

President and CEO of the Iowa West Foundation, Pete Tulipana, believes the bell tower is a shining example of the Council Bluffs community coming together to support a passion project.

“Our community comes together when they care deeply about something,” he said. 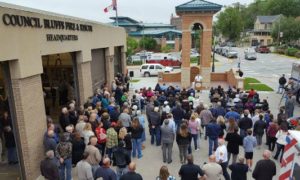 Now the bell rings in celebration of firefighter hires, promotions, and retirements as well as knells with the passing of both line of duty and retired firefighters. In addition, the 24-foot tower with a roof that matches the library across the street and the surrounding plaza adds to the wealth of historic attractions in the downtown area.

Most importantly, one of the city’s oldest artifacts is back where it belongs: out of the warehouse and into public view, thanks in large part to the Council Bluffs Fire Department and the community. 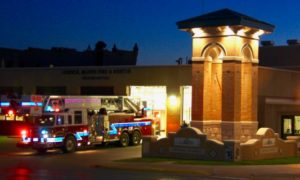