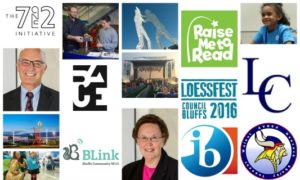 Before we look ahead to 2017, the end of the year is a good time to reflect on all that happened in the previous 12 months. Several Iowa West Foundation initiatives were launched and expanded upon while a number of large grants with potential for significant impact were awarded in 2016. Let’s take a look at the year in review.

The Iowa West Foundation launched the 712 initiative in January, a community development consortium that brought together five local organizations in Council Bluffs to focus on proactive “placemaking.” Since that time, Executive Director Chet Jackson has been hired to lead the nonprofit, which will focus on place-based real estate development, neighborhood engagement, and design and activation of public spaces.

The Board of Directors of Iowa West welcomed four new board members in February while saying goodbye to three long-time board members. Jason James, Kirk Madsen, Tamara Pavich and Jack Ruesch, all of Council Bluffs, joined the Iowa West Racing Association Board. Due to term limits, Deb Bass, Dr. David Kuper, and Gary Woods left the board and were honored for their years of service.

Also in February, the Iowa West Foundation announced multi-year funding for select organizations identified as crucial to the stability of the community. The initiative provides essential general operating funds over a three-year period to organizations who fulfill the most critical roles in Pottawattamie County. The selected organizations include Boys and Girls Club of the Midlands, FAMILY, Inc., Green Hills AEA for their early childhood programs, Heartland Family Service, Justice For Our Neighbors, Lutheran Family Services, and MICAH House.

In March, I began my fifth year at the Iowa West Foundation. We also welcomed Kathy Fry, executive assistant to the CEO and office manager to the staff while Deb Debbaut, Director of Grants Administration, celebrated 20 years of service.

We also celebrated the 20th anniversary of gaming in the Council Bluffs community in March. We are grateful to be the nonprofit sponsors for Ameristar and Harrah’s and the license holder for the Horseshoe.

The City Council approved the field house and hotel development that will reinvigorate the Mid-America Center area. Construction on the recreation center will be completed in January, while construction on the hotel will begin the early spring of 2017.

The Iowa West Foundation, along with the AKSARBEN Foundation and the Peter Kiewit Foundation, honored 61 students from Council Bluffs and Riverside school districts who received the Pottawattamie Promise scholarship to Iowa Western Community College.

Kool and the Gang kicked off Loessfest, an annual celebration funded in part by the Iowa West Foundation over the Memorial Day holiday that brings the community together in Tom Hanafan River’s Edge Park. Check out a time-lapse of the crowds at the park.

The Iowa West Foundation announced the launch of a new arts organization, Pottawattamie, Arts, Culture & Entertainment to strengthen, develop and promote art, cultural, and historical institutions, organizations, and activities in Council Bluffs and Pottawattamie County. PACE has since declared the Harvester II will be home to an arts and culture center that will start construction in late 2017-early 2018. The Iowa West Foundation has committed $7 million to the capital campaign.

About 100 additional third-graders in the Council Bluffs Community school district were able to attend summer school as part of the district’s Summer Explorations Program, backed by the Iowa West Foundation. Later in the year, the Foundation announced funding for summer school in both 2017 and 2018, which will allow an additional 800 students per year to attend.

The Iowa West Foundation released its 2015 annual report in August, in which we unveiled that we had crossed the $400 million mark in grant and initiative funding.

BLink Wi-Fi launched Phase II in September, covering a large portion of the west end of Council Bluffs. The free Wi-Fi network, funded in part by the Iowa West Foundation, now includes the new Gale Wickersham Athletic Complex where it can accommodate more than 5,000 simultaneous users. When completed, BLink will reach more than 20 square miles, providing Wi-Fi access to more than 40,000 people and reaching the doorsteps of nearly every home and business in Council Bluffs.

Also in September, the Kitchen Council held its first pitch competition for local food entrepreneurs. Located in the former Famous Dave’s at the Mid-America Center, the Council Bluffs-Omaha metro area’s first designated culinary incubator is set to open early next year. The initiative is a collaboration between the Iowa West Foundation, the Council Bluffs Chamber of Commerce and the Greater Omaha Chamber under the umbrella of its regional economic development partnership

Education was a major theme for the final grant cycle of 2016, which included the announcement of the Iowa West Foundation’s partnership with Council Bluffs schools to expand the International Baccalaureate (IB) program to both Kirn and Wilson middle schools. The inquiry-based learning model will be Iowa’s first known IB Middle School program outside of Des Moines. The total funding to implement the initiative at both middle schools is $1.4 million over the next four years.

Raise Me to Read, an Iowa West Foundation early literacy initiative kicked off with “Read for the Record” at the Charles E. Lakin Human Services Campus in October. A collaborative effort amongst schools, nonprofits, businesses, and families, its goal is for the community to work together to help children in Pottawattamie County, regardless of socioeconomic background, read on grade level by the 3rd grade. Raise Me to Read will focus on school readiness, summer learning, and chronic absenteeism.

In November, we announced the expansion of Pottawattamie Promise into Lewis Central and AHSTW high schools. With the additions to Council Bluffs and Riverside Community school districts, a total of nearly 150 students per year will pursue their post-secondary educational opportunity of choice beginning with the Class of 2020. Each scholarship valued at up to $15,000 per year depending on the program chosen by the student.

The City Council approved the next phase of Riverfront development in December that will include the River’s Edge apartment development. This paves the way for the construction of Iowa West Foundation’s office building to begin in the spring.

In 2017 we look forward to the opening of the field house in the first quarter, honoring close to 100 students with the Pottawattamie Promise scholarship in the spring, focusing on our next 5-year strategic plan in late summer and watching the West Broadway reconstruction project begin to take shape all year long. Until then, happy holidays and have a great new year.