In case you missed it, the National Center for Arts Research recently ranked Council Bluffs-Omaha in the top 10 of all mid-sized US cities for arts vibrancy. The metro was awarded the number six spot for the overall strength of its arts community. While the report notes that Omaha “is home to an abundance of arts organizations,” (Joslyn, Bemis, Holland and the Orpheum) the Council Bluffs arts community, and the Iowa West Foundation initiative Pottawattamie Arts, Culture & Entertainment (PACE) in particular, contributed heavily to the ranking. But don’t just take my word for it. Here’s an excerpt from an Omaha World-Herald Editorial: 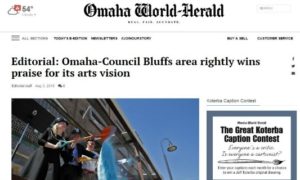 “The research center emphasized the importance of Council Bluffs’ Hoff Family Arts and Culture Center, which will feature the Bob and Polina Schlott Performing Arts Center. It was spearheaded by Pottawattamie Arts, Culture and Entertainment. The 95,000-square-foot complex, funded through a fundraising campaign of nearly $27 million, will be home to the American Midwest Ballet (formerly Ballet Nebraska), Chanticleer Theater and the Kanesville Symphony.
That ambitious Council Bluffs project was likely a significant factor that helped move the Omaha- Council Bluffs area this year into the report’s top 10 for middle-sized communities for the first time.”

The OWH editorial staff wasn’t the only one to take notice of what’s happening in Council Bluffs. Director of Iowa Economic Development Authority tweeted this out to her nearly 3,0000 followers following the announcement. 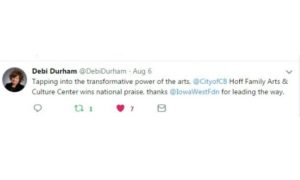 This notoriety and the #6 ranking are not a happy accident. It wasn’t random, by chance or good luck, but rather forward thinking vision, strategic planning, determination and hard work. For the Iowa West Foundation, it started with the public art master plan in 2005, which has evolved into a world class public art collection. From there, a $2.2 million investment helped bring to fruition the Harvester Artists Lofts, an affordable live-work space for local artists in the S. Main St. District – recently named a Great Place by the state of Iowa. We can’t forget the Art-in-the Park initiative in partnership with the City of Council Bluffs as well as the launch of the Otocast art app, in partnership with the Council Bluffs Convention and Visitor’s Bureau. Last but not least, PACE is one of the Foundation’s largest dollar initiatives at $9 million.

When it comes to the arts and culture, people often how those things help communities and why they make for important investments.
As the report states:

“Arts and culture play a vital role in a city’s livability and its social cohesion. Leading communities and funders recognize the transformative power of arts and culture.”

So that’s how. My answer to why is simple. We deserve to live in a community where our kids and families have access to the best opportunities and the highest quality of life we can collectively make happen. So stick out your chest and be proud, Council Bluffs. We are No. 6 in the nation.