Giggles, squeals, babbles, coos — and if we’re being honest, the occasional cry — bounce off the freshly-painted, light blue walls of the Children’s Nest child care center in Audubon, Iowa on a recent Wednesday morning. Infants like 7-month-old Logan Fowble are literally breathing new life into the building that previously served as the residential care wing of the Friendship Home nursing care facility. 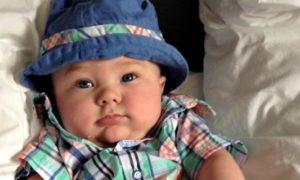 How old met new is an interesting story in this town of 2,000 people. It all started when Iowa House Representative Dan Muhlbauer stopped by for a town hall visit in the spring of 2013. He questioned the audience on their thoughts as to why the county’s population declined for the third year in a row. Several parents piped up and cited a lack of child care options.

At the time, approximately 20 percent of Audubon County families with children ages 0-5 were seeking care for their children. Sixty-one children were on the waiting list for in-home daycares, forcing some families to forgo otherwise available work. Many parents relied on untrained friends or family for help.

Logan Dirk’s mom, Cortney, was one of those people. A friend’s mom looked after Cortney’s son. Heller and his wife had begged a retiree to help them out. Luckily for both Dirks and Heller, those that spoke up about the lack of child care options at the town hall event didn’t stop there. They formed a focus group that became the 501c3 Audubon County Early Childhood Organization (ACECO) and began to plan. By the time they approached the Iowa West Foundation in 2015 for a matching grant, they had already raised $145,000 toward their $295,000 goal in less than a year. In fact, ACECO’s fundraising and the town’s support is what first drew IWF in. Their early childhood education mission and strategy aligned with IWF’s strategic plan, which made the grant a win for everyone. 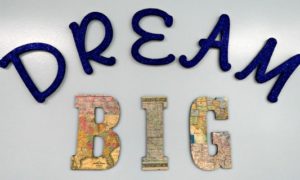 “We approached this project with the whole community in mind,” said Heller, treasurer of the ACECO board. “We started by garnering support from the big businesses in Audubon, like AMVC (Audubon Manning Vet Clinic) and the Audubon State Bank, and it was really a grassroots effort from there.” 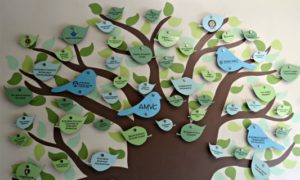 Board members were called to the town’s Casey’s nearly every other day because the wooden bird’s nest donation box near the register was overflowing with cash. Several community groups also contributed to the cause including the Audubon County Cattlemen’s Association, the T-Bone Association, the Exira Lions Club, the Audubon Lions Club, the Audubon Masons, the Audubon Women’s Group and several churches. Another partner, the Friendship Home — also a nonprofit organization –wanted its empty space put to good, community use.

The ACECO gutted and remodeled the space, keeping with the “nest” theme along the way. The labeled the rooms Chickadees, Robins, Doves and Bluebirds for the different age groups and began taking enrollment for the 45 available slots. The $40,000 in Iowa West Foundation funding went to purchase high quality, age appropriate equipment like yellow “MyRider” trikes for the cement path outside, durable, wooden play equipment, mini-chairs, kid-friendly rugs and bright, happy art for the walls. On Aug. 31 of this year, the Children’s Nest opened its doors as the first and only licensed child care center in Audubon County. 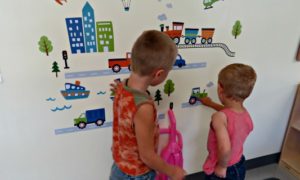 “Our goal is to provide children with age-appropriate curriculum, physical activity and healthy, nutritious food, all of which help prepare them for kindergarten and subsequent years,” said Kate Hargens, ACECO Board President. “Children develop and learn more during this time than any other time in their lives. By providing a nurturing environment, consistent schedules and trained early childhood professionals, the Children’s Nest supports healthy cognitive, physical and emotional growth to the youth of Audubon County.”

The emphasis on safe, quality and reliable child care isn’t going unnoticed by Dirks. She couldn’t be happier with Logan’s Children’s Nest experience so far.

“We really like it there. He seems like he’s happy to be doing more, and I’ve noticed he’s developing more,” she said. “The teachers really focus on the kids because that’s the job they’re there to do. It’s definitely more like a school setting versus a babysitter.”

Dirks especially appreciates the daily progress reports the Chickadee Room teacher sends home. She likes to know if Logan’s learning about shapes, colors or numbers so she can replicate it at home. Now expecting another baby boy next March, Dirks isn’t sure what she would’ve done without the Children’s Nest. She and Logan’s dad, who both work in Carroll, had contemplated moving in the past.

“Daycare is what’s keeping me in Audubon,” Dirks said. “It’s a huge weight lifted off my shoulders, knowing he’s safe every day and that they take good care of him.” 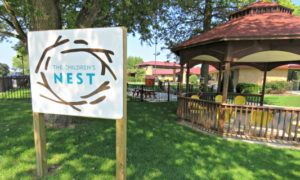 So the answer to the age-old chicken or the egg question is actually neither, it’s the nest. The Children’s Nest.