(Council Bluffs, IA) – Co-developers Iowa West Foundation and Noddle Companies broke ground today on the first office building at River’s Edge in Council Bluffs. The 4-story, 67,000 square foot building will serve as the new headquarters for the Foundation when it opens in late 2018. 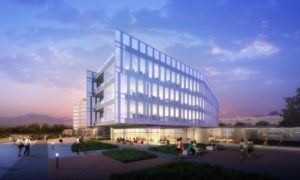 An anchor tenant, the Iowa West Foundation has long served as a catalyst of development on the Iowa side of the Missouri River. The Board of Directors has committed more the $22 million in the past 15 years to develop the 5-acre Great Lawn known as Tom Hanafan River’s Edge Park, incorporate works of public art like “Big Mo” and “Rays,” and support events such as Loessfest. In partnership with the City of Council Bluffs, the Foundation also has been instrumental in funding the River’s Edge Pavilion community building and surrounding features as well as the 743-stall parking garage currently under construction.

“The Riverfront is a unique asset with huge potential for economic development in Council Bluffs,” said Pete Tulipana, President and CEO of the Iowa West Foundation. “By relocating our headquarters to River’s Edge, we are putting a stake in the ground that will undoubtedly drive future success and transform our region.”

Designed by HDR, the building will feature energy and environmentally conscious design with a two-story living green wall in the lobby. Its glass exterior and west facing patios will offer picturesque views of the green space at River’s Edge Park, the Omaha skyline and the Bob Kerrey Pedestrian Bridge and Missouri River. 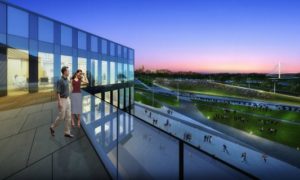 Prior to the groundbreaking, the office building received an award from the American Institute of Architects for its design. Judges said, “This unbuilt project stands out because of the form, composition, and variety of exterior glass…this project, as rendered, is successful as architecture as well as urban design, creating lively urban spaces and a strong connection between the building and the river.”

Creating lively urban spaces is a specialty of developer Jay Noddle, who is behind AKSARBEN Village in Omaha as well as several other major developments in the metro and across the country. The office building is just one element of the development at River’s Edge, which –when finished – will span 25+ acres and include nearly 200,000 square feet of office/retail space as well as 350+ residences ranging from 10-story condos to apartments.

Noddle Companies is excited to begin construction of this important project that creates a new front door to western Iowa and advances the redevelopment of the river corridor.

“This first River’s Edge Office Building is a fantastic piece of architecture and results in a highly efficient option for office space users of all sizes,” Jay Noddle said.

Noddle stated there is a lot of leasing activity happening now and that the building and parking will open in late 2018. Construction is already underway on the apartments, with construction on the first condo tower to begin soon. Other amenities include a 10-foot-wide, two-lane bike path through the River’s Edge corridor and a pedestrian-friendly piazza specially designed for events like art fairs, music festivals, and other public activities.

“Not only are we excited about our new office, but we also are eager for the community to enjoy the mixed-use design of this development, Tulipana said. “With the housing, walkable streets and all the outdoor amenities, River’s Edge will be a place where both local families and out-of-town visitors can gather to enjoy all Council Bluffs has to offer.”

“The River’s Edge development represents a successful partnership between public and private sectors,” Walsh said. “The collaboration between the City of Council Bluffs, Iowa West Foundation, and Noddle Companies has ushered in a new level of development that is the envy of the entire metropolitan area.”

Multiple tenants are considering calling River’s Edge Office Building 1 home, and announcements will be made as they are confirmed, A second office building will follow. Together, the two buildings could employ up to 1,000 people.

The Iowa West Foundation is one of the largest, private foundations in the Midwest. It has distributed more than $400 million to nonprofits and governmental agencies throughout southwest Iowa and eastern Nebraska since the inception of its grant program. Funding for the grants comes from investment earnings and the Iowa West Racing Association, which receives contractual fees from casino operators, Ameristar and Harrah’s. IWRA is the license sponsor for Ameristar and Harrah’s and the license holder for Horseshoe Casino. The Foundation targets resources into programs and projects that focus on economic development, education, placemaking and healthy families.

Noddle Companies, founded in the early 1970’s and headquartered in the heart of the Midwest, provides a full spectrum of development, management, and leasing. To date, our portfolio includes over 150 office, retail, and mixed-use commercial developments in 17 states, as well as over 10,000,000 square feet of managed properties. Since 2000, the firm has established itself as one of the industry’s leading master developers of urban mixed-use projects and public/private partnerships. In addition to the development of River’s Edge, current projects underway include HDR’s 10-story LEED Gold Version 4 Global Headquarters in Omaha’s Aksarben Village, the 500-acre West Farm Development near 144th and West Dodge Road in Omaha, Steel Ridge at I-80 and Highway 370 and a 200-acre mixed-use project in Thornton, Colorado.