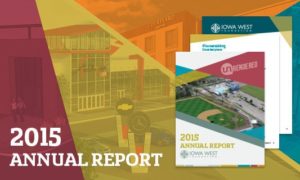 In preparing for this year’s annual report, it became clear that there were a number of major projects started in 2015 that are still in the works (at the Mid-America Center, the Riverfront, and West Broadway to name a few). Because the work on these transformational efforts is ongoing, our images primarily consist of renderings. These renderings are typically designed by an architect who translates a vision for what the structure/development/park could look like at project completion. While these drawings are a good way to make an abstract idea more concrete at the beginning of a project, the final results often end up better than anyone could’ve predicted.

For example, on paper we saw that the Iowa West Foundation Pottawattamie Promise initiative enabled 45 high school seniors to attend Iowa Western on full scholarship in the fall of 2015. That number is impressive, but to witness those students stand and declare their plans for the future in front of their peers at the launch last spring was a wonderful, tangible way to witness how they can and will impact our future workforce.

Much like an architect designs a blueprint with a framework to support the structure in mind, the Foundation has sought to help build sustainable and effective delivery systems for organizations in our community. A sample of this in action is the formation of a new Community Development consortium that previously operated as five separate and distinct entities.
The Iowa West Foundation advocated that if these organizations were truly going to have a substantial impact, they should go beyond just coordinating activities and find ways to integrate their work and their organizations. Last October, Pottawattamie County Development Corporation, Bluffs Downtown and Live Well Council Bluffs merged and then aligned with the Council Bluffs Housing Trust Fund and Habitat for Humanity. Look for them to make a greater impact in the years to come.

This year we awarded more than $14 million in grants as well as initiatives like the two mentioned above. Initiatives have become a significant way in which we partner with the community to achieve our vision to make the community a place where families want to live and businesses want to locate because of its quality of life and standard of living. We believe it’s our role and responsibility to take a proactive approach in order to see that renderings become reality.

We’ve themed this annual report “UNRENDERED” for two reasons.
1. We’re excited to be a part of the new Council Bluffs “UN” image campaign,
which highlights that the city is “UNlike Anywhere Else. On Purpose.”
2. We are ready for the projects you’ll see in the renderings that follow to come
to life over the next few years and thus become “unrendered.”